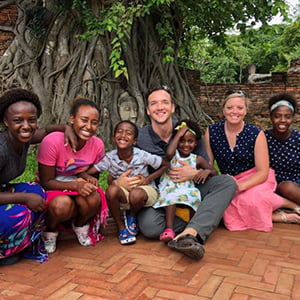 Dr. Kelly Dowdall-Garberson, the owner and founder of AAVS, is originally from Detroit, Michigan. She actually attended high school in both China and South Korea before moving to Florida for her undergraduate studies. Dr. Kelly graduated from Eckerd College with degrees in biochemistry, Spanish and biology. She then earned her Doctor of Veterinary Medicine degree from North Carolina State University in 2011, one of the most top-ranked vet schools in the country.

After completing vet school, she followed her husband (active duty Army officer) to Olympia, WA, where she practiced small animal medicine. “Life happened” (as it often does) and Dr. Kelly moved to Chiang Mai, Thailand for 3-years, where she worked for the U.S. Department of State working in management and public health. During her time in Thailand, Dr. Kelly earned her Master’s of Public Health as well as her Master’s of Science in Education degrees. She was nominated for several national volunteer awards for her work creating a women’s development project, as well devising a Congressionally funded project to improve air quality and respiratory health in northern Thailand.

After her time in Thailand, Dr. Kelly and her family moved back to Olympia, WA where she worked as a public health veterinarian with the USDA for 2 years. In 2017, Dr. Kelly and her family moved to paradise- HAWAII. Dr. Kelly worked as the Chief Veterinarian at the Hawaiian Humane Society for 7 months, which was followed by several months of relief veterinary work around Oahu. After seeing the need for low-cost veterinary care in Oahu, she founded AAVS in August, 2018, proudly partnering with animal rescue and welfare groups on Oahu.

Dr. Kelly has 5 children (all from Ethiopia), 3 dogs, and often at least 1 foster dog. She loves pink, pigs and ice cream, and her favorite past time is spending time with her lively, fun-loving family. She’s passionate about travel and has been to over 50 countries on 6 continents, and has lived in 7 countries.

She is an Army spouse and loves working alongside other military spouses and families. She hopes her work helps to redefine the mindset and stereotypes of who military spouses are, and what they are capable of! She is also very connected to the adoption community, and is an advocate for family preservation, women’s empowerment and education. She is passionate about older child adoption as well. Dr. Kelly remains closely connected to China, South Korea, Thailand and Ethiopia.

In the future, Dr. Kelly plans to start the Mission Aloha Foundation, a non-profit that will promote one health (veterinary medicine, human and environmental health) in Hawaii and around the globe.

She loves working with a wide variety of people, and is fascinated by different cultures (she has spent 20% of her life living abroad). Dr. Kelly and her family love living on Oahu and consider Hawaii home.

Dr. Kelly believes veterinary medicine is a tool to be utilized to improve the lives of people and animals. There’s no doubt this is her passion and we can’t wait to see where AAVS grows!

Dr. Kaleikau has been a veterinarian with Aloha Affordable Veterinary Services since December of 2019.

She grew up in Maryland and graduated from the University of Maryland with a degree in Animal Sciences in 2008. She then gained experience as a veterinary technician at a practice in Washington DC for 4 years before heading off to vet school at Ross University in St. Kitts. She graduated in 2016 and practiced alongside wonderful vets and techs in Maryland for 4 years. The draw to return to the island life and being close to family brought her to Oahu in December 2019. She’s grateful for the opportunity to advocate for an animal’s health and well-being and empowering pet families to give their pets the best care they can.

Her favorite aspect of this profession is the ability to continuously learn and teach. She learns new things from other vets, technicians, and owners daily and enjoys teaching as well. She is thrilled to have joined such a supportive community at AAVS.

In her free time, she enjoys spending time ourdoors, exploring the island with her husband Anthony and their beloved Caribbean mutt, Oscar. 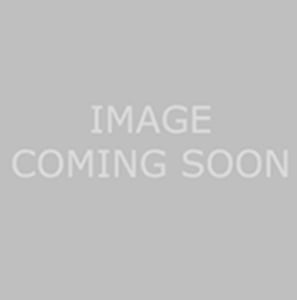 Dr Dion Regelson grew up on a Dairy Farm with Guernsey’s and Jersey’s, horses, chickens, sheep and pigs, so he had decided at an early age that he wanted to work with animals.  He was born in Berkeley, CA. He attended an undergraduate study at the University of Wyoming, earned an MS in Biotechnology and Bioinformatics from CSU Channel Islands and went on to Veterinary School in Ft. Collins, CO.

His Special Skills include Regenerative Medicine (Stem Cells, Platelet Rich Plasma), Dentistry, Orthopedic and Airway (Brachycephalic) Surgery. He has also written for the USDA. Regarding Safety and Efficacy Trials for Snake Bites. He particularly enjoys medicine and surgery, especially surgery that makes it easier for Pugs to breathe.

When pets experience trauma or severe life stressors, it is possible that their lives will unravel. Dr. Regelson’s great passion is bringing healing to animals who have been through a traumatic/stressful experience. He helps his patients live life without pain or disease.

He knows that no single approach is right for every individual, and so he has been trained in a range of modalities including, medicine, surgery, Regenerative medicine, arthritis and pain management.

When Dr. Regelson is not working he can be found spend time with his dog and two cats, hiking, yoga, watching movies, or snorkeling.

Laura has been a registered veterinary technician at Aloha Affordable Veterinary Services since July of 2019.

After graduating high school in Central Arkansas, she planned on majoring in Zoology. She wanted to work in Wildlife Conservation; however, she chose my second love and received a degree in Digital Media and Design from Arkansas State University. Laura was ambitious in her graphic design career, though there was still a void in her life. She yearned for her childhood dream of working with animals. After moving to Hawaii in 2016, she decided she needed to fill that void and she obtained a degree in Veterinary Technology from Windward Community College – University of Hawaii. Shortly after graduation, she passed her boards and became a Registered Technician.

Laura has always had a love for animals. She grew up with a Cocker Spaniel and bunny rabbits. She also have a fondness for the tiny furry rodents. She cared for the rambunctious rats in my sixth-grade science class and she’s had pet rats ever since.

Her favorite things about working with animals is the joy they bring her every day. Nursing a sick animal back to health and seeing tears of joy in the owners faces, or puppy cuddles when you’re having a bad day! There’s so much love in the veterinary field.

She knows she’s in the right profession, because when she wakes up the first thing on her mind is that she’s excited to go to work (and coffee!). It hardly feels like work when your co-workers are best friends, animals bring you joy, and the job challenges you to be the best version of yourself. The days fly by, you feel appreciated with your clients, you get excited to learn new things! This is her happy place.

Living in Hawaii means that when you’re not at work you’re enjoying paradise. Her weekends are filled with smiley faces, sunshine, and SUPing. She enjoys spending time with her dog, Samson, on the beach or being lazy on the couch! Laughing with friends while playing games and trying out new restaurants and breweries are just a few of her favorite things. In short, she lives to laugh! 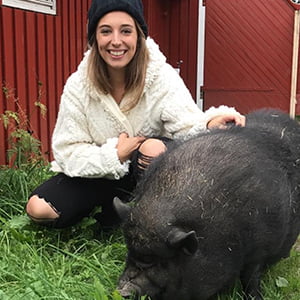 Stephanie has been with Aloha Affordable Veterinary Services since the end of December.

She absolutely loves helping animals as much as she can. She loves knowing she is helping the community as well as the animals. The positive outcomes are greatly encouraging. She has been volunteering for nonprofit organizations with fostering animals, as well as volunteering at spay and neuter clinic on the weekends.

She’s always had a big heart for animals but didn’t imagine herself as working in the field. Once she began volunteering and helping out she fell head over heels for working in the veterinarian field. She is in love with her job and is very excited about going to work every day.

When she’s not at work, she tutors children with learning disabilities and is constantly volunteering at spay and neuter clinics or doing trap and releasing of feral cats. She also loves taking her own dogs on hikes.

Born and raised in Hawaii, Nadia has been with Aloha Affordable Veterinary Services since August of 2019. She is currently a student at WCC and is working on getting her Veterinary Technician credentials.

When she’s not at work, she’s usually found at the beach. 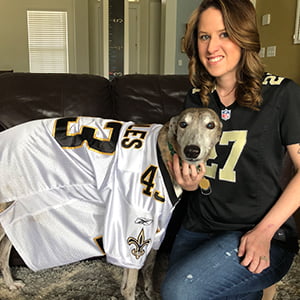 Whitney began her role as a customer service representative in October of 2019. She is originally from a small town south of New Orleans called Lafitte.

Originally she wanted to be a writer and went to school as an English/Communications major but after not putting her degree to much use her husband encouraged her to pursue her first love and work with animals. That’s where Aloha Affordable came in, she has always considered the clinic to have been such a blessing to work for, hired as a customer service representative, she watched as the Doctors and staff cared for countless animals and saw them do it with so much passion and commitment each time. This inspired her to go back to school and now she’s in a Veterinarian Technician program.

Her family consists of her husband who she has been with for 10+ years, and two children. She also has a Dachshund and three cats.

When she’s not at the clinic, she enjoys being with family, reading and exploring new places. She collects anything Disney and Harry Potter related, and loved records on vinyl. Her favorite motto is “We can’t help everyone, but everyone can help others.”.

Send Us a Message

We use cookies on our website to give you the most relevant experience by remembering your preferences and repeat visits. By clicking “Accept All”, you consent to the use of ALL the cookies. However, you may visit "Cookie Settings" to provide a controlled consent.
Cookie SettingsAccept All
Manage consent

This website uses cookies to improve your experience while you navigate through the website. Out of these, the cookies that are categorized as necessary are stored on your browser as they are essential for the working of basic functionalities of the website. We also use third-party cookies that help us analyze and understand how you use this website. These cookies will be stored in your browser only with your consent. You also have the option to opt-out of these cookies. But opting out of some of these cookies may affect your browsing experience.
Necessary Always Enabled
Necessary cookies are absolutely essential for the website to function properly. This category only includes cookies that ensures basic functionalities and security features of the website. These cookies do not store any personal information.
Non-necessary
Any cookies that may not be particularly necessary for the website to function and is used specifically to collect user personal data via analytics, ads, other embedded contents are termed as non-necessary cookies. It is mandatory to procure user consent prior to running these cookies on your website.
SAVE & ACCEPT